Is chilli good for you?

It is believed that chillies has been part of the human diet since at least 7500 BC. Explorer Christopher Columbus brought it back to Spain in the 15th century and its cultivation spread swiftly through Europe, Asia, India and Africa.

There are thousands of variations, coloured anything from yellow to green to red to black, and varying in heat from mildly warm to mouth-blisteringly hot.

Green chillies are unripe, so usually aren’t as hot as red ones. The active ingredient is capsaicin, most of which comes from the white placenta to which the seeds attach to. If you prefer your chilli milder, try a green one and remove the seeds and placenta before chopping. Wash your hands well afterwards as the burn can linger.

Chilli contains up to seven times the vitamin C level of an orange and has a range of health benefits, including fighting sinus congestion, aiding digestion and helping to relieve migraines and muscle, joint and nerve pain. It’s also a good source of vitamins A and E, beta-carotene, folic acid and potassium. Chilli has long been used to reduce food micro-contamination and is also considered a potential metabolism booster for weight loss*.

Chilli can be irritating if consumed in excess. Extremely hot chillies can burn the inside of the mouth and can also be irritating when excreted. A glass of full cream milk or a yoghurt side dish such as cucumber raita can help soothe the bite. The casein in milk pulls the capsaicin away from nerve-receptor sites to ease the burning sensation. If you have any pre-existing medical condition, always ask your doctor if it’s okay to eat hot chilli.

So what does SHU mean? 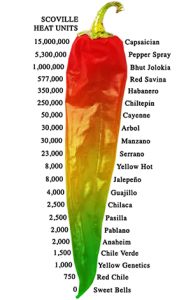 The Scoville Scale is a measurement of the pungency (spicy heat) of chili peppers, such as the jalapeño, the ghost pepper, and the world’s current hottest pepper—the Carolina Reaper, or other spicy foods as reported in Scoville Heat Units (SHU), a function of capsaicin concentration. Capsaicin is one of many related chemicals, collectively called capsaicinoids. The scale is named after its creator, American pharmacist Wilbur Scoville. His method, devised in 1912, is known as the Scoville Organoleptic Test.

Unlike methods based on high-performance liquid chromatography, the Scoville Scale is an empirical measurement dependent on the capsaicin sensitivity of testers and so is not a precise or accurate method to measure capsaicinoid concentration. In Scoville’s method, an exact weight of dried pepper is dissolved in alcohol to extract the heat components (capsinoids), then diluted in a solution of sugar water. Decreasing concentrations of the extracted capsinoids are given to a panel of five trained tasters, until a majority (at least three) can no longer detect the heat in a dilution. The heat level is based on this dilution, rated in multiples of 100 SHU. A weakness of the Scoville Organoleptic Test is it’s imprecision due to human subjectivity, depending on the taster’s palate and their number of mouth heat receptors, which varies greatly among people.

Another weakness is sensory fatigue: the palate is quickly desensitised to capsaicins after tasting a few samples within a short time period. Results vary widely (up to ± 50%) between laboratories. Since Scoville ratings are defined per unit of dry mass, comparison of ratings between products having different water content can be misleading. For example, typical fresh chili peppers have a water content around 90 percent, whereas Tabasco sauce has a water content of 95 percent.

For law-enforcement-grade pepper spray, values from 500,000 up to 1 million SHU have been mentioned, but the actual strength of the spray depends on the dilution, which could vary by a factor of 10.The chilis with the highest rating on the Scoville scale exceed one million Scoville units, and include specimens of naga jolokia or bhut jolokia and its cultivar, the “ghost chili”, which does not have official cultivar status.

The Carolina Reaper is currently the highest rated pepper in the world. Numerical results for any specimen vary depending on its cultivation conditions and the uncertainty of the laboratory methods used to assess the capsaicinoid content. Pungency values for any pepper are variable, owing to expected variation within a species—easily by a factor of 10 or more—depending on seed lineage, climate (humidity is a big factor for the Bhut Jolokia; the Dorset Naga and the original Naga have quite different ratings), and even soil (this is especially true of habaneros). The inaccuracies described in the measurement methods above also contribute to the imprecision of these values.